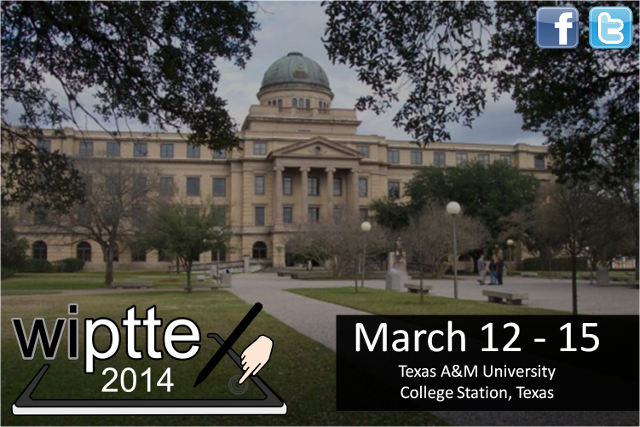 WIPTTE 2014 :: The Eighth Workshop on the
Impact of Pen and Touch Technology on Education

"Changing the Hands of Education"

Pen, touch, and tablets are changing the face of education. Be part of the revolution!

The Workshop on the Impact of Pen and Touch Technology in Education (WIPTTE) attempts to bring together users, developers, decision makers, students, and teachers to help ascertain and drive the trend of future education.

WIPTTE has been going strong for eight years now, with this being the eight annual instantiation of the conference. Each year approximately 150 participants from industry, academia (both developers and users), K-12 teachers, and junior/high school students came to share their tools, experiences, ideas, innovative uses with this new hands-on technology.

The content of thought can be regarded as internalized and intermixed perceptions of the world and the actions of thought as internalized and intermixed actions on the world. Reexternalizing the content of thought onto something perceptible and reexternalizing the actions of thinking as actions of the body can facilitate thinking. New technologies can do both. They can allow creation and revision of external representations and they can allow interaction with the hands and the body. This analysis will be supported by several empirical studies. One will show that students learn more from creating visual explanations of STEM phenomena than from creating verbal ones. Another will show that conceptually congruent actions on an ipad promote arithmetic performance. A third will show that when reading spatial descriptions, students use their hands to create mental models.

Barbara Tversky is a cognitive psychologist who spent many years at Stanford University and is now at Columbia Teachers College. She has done research on memory, learning, mental models, spatial thinking and language, event perception and cognition, diagrammatic reasoning, visual narratives, creativity, and gesture, with applications to many areas of design, graphics, computer interfaces, and the arts.


This talk will describe three projects centered around pen-based interaction. PhysInk is a system that makes it easy to demonstrate 2D behavior by sketching and directly manipulating objects on a physics-enabled stage. We have begun developing CodeInk, a system that provides a direct manipulation language for explaining algorithms and an algorithm animation tool embodying that language. Finally, ClockSketch is the first member of a family of applications that may revolutionize neuropsychological testing by capturing both the test result and the behavior that produced it.

Randall Davis received an AB from Dartmouth (summa cum laude, Phi Beta Kappa) in 1970 and a PhD from Stanford in artificial intelligence in 1976. He joined the EECS Department in 1978, and from 1979-1981 held an Esther and Harold Edgerton Endowed Chair. He served for 5 years as Associate Director of the Artificial Intelligence Laboratory, and is currently a Professor in the Department and a Research Director of CSAIL. He has been one of the seminal contributors to the field of knowledge-based systems, publishing more than 50 articles and playing a central role in the development of several systems. His current research involves developing advanced tools that permit natural, sketch-based interaction with software, particularly for computer-aided design and design rationale capture.


The talk will cover interesting aspects of OneNote history, and particularly the highlights and challenges of productizing ink and tablet experiences in Microsoft applications with the goal of broad reach. It will also cover the exciting uses of tablets and ink we are seeing in education and beyond, and the perspective on the future potential of digital ink and corresponding developments at Microsoft.

Olya Veselova is a Senior Lead Program Manager on OneNote - Microsoft's primary note-taking and inking application delivered as part of the Microsoft Office suite. Olya has worked on note-taking, inking, sketching, and the tablet experience for over twelve years. She started out at the MIT AI Lab working with Randall Davis on sketch understanding and shape recognition, where she developed a system for perceptually based learning of shape descriptions. She carried her passion for tablets and ink into her work in the industry, when she joined the OneNote team and Microsoft. She has worked on OneNote for the past ten years, developing the design and experience for a large number of OneNote features, including touch and ink and optimizing OneNote for tablets. Olya is a passionate advocate for the potential of digital ink and natural expression in education, work, and personal life and is continually promoting ink related investments in OneNote and other Microsoft initiatives.